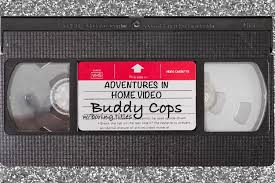 There are a few great pairings in the history of the world; peanut butter & jelly, Count Chocula & milk, Run & DMC, a cold beer & a hot day, Bill Murray & Harold Ramis, Romeo & Juliet, pork chops & apple sauce, etc. You get the idea. But truly there is one pairing that stands above them all and puts the rest to shame.

As an art form, buddy cop movies are close to perfection. Forget Hamlet, or King Lear. Forget the Cat in the Hat. Buddy cop flicks got ‘em all beat. We can all remember where we were the first time Riggs and Murtaugh complained about how they were “too old for this shit.” The constant repetition of the name Mike Lowery is forever etched into our brains.

Do you understand the words that are coming out of my mouth?

From your Eddie Murphys and Nick Noltes, your Tangos and Cashes, to your more obscure team ups, like Jay Leno and Mr. Miyagi, (yeah, called Collision Course, and since Leno was in it, it had to be about cars,) or Billy Crystal and Gregory Hines in Running Scared, buddy cop duos run the gamut of possible team-ups.

And why stop there? Animals can be buddies too. For every Turner, there must be an equal and opposite Hooch. Every time Chuck Norris wants to beat up some terrorists, he takes with him a tiny dog named Betty into the fray, and who can blame him? Hell, Jim Belushi and his K-9 have at least 3 movies together under their belt and collar respectively.

Dogs not doing it for you? How about having a cartoon for a buddy? Perhaps a rabbit with a smokin’ hawt wife and who has been framed for wacky murder? No? Not up your alley? What about an obscene, uncouth puppet with a penchant for skeet, skeet, skeeting all over the place? Maybe a clumsy dinosaur from the future who wears clothes and is named Theodore Rex? If that’s not your thang, we can always team you up with you mom, Estelle Getty. She loves to shoot! If you act now, I can set you up with an alien with a weird raisin head and a love for copious amounts of milk. Or my person favorite, the zombie buddy cops in the underground classis Dead Heat. Such a tasty treat!

But hold up fellas, Let’s not try to steal all the buddy cop movies here. Let’s be some classy gents. The Heat, starring Sandra B and Melissa M wasn’t too bad.* According to Wikipedia, Miss Congeniality counts as a buddy cop movie, I don’t know if I believe that, but if true, and  you throw in Demolition Man and Speed into the mix and Sandra Bullock has got the female buddy cop game on lock!

And on top of that, they don’t even have to be cops. They can just be two people forced together by circumstances, who have a mission to complete. Either to clear their own names or to stop an evil villain, or save a bunch of grubby orphans and their filthy orphanage. The possibilities are endless.

What is it about buddy cop movies that endear themselves to us so much? Why are they so timeless? I’m no film school nerdlinger or anything, but I got a theory or two. First of all, people like seeing friends. True not all buddy teams start as friends, and that leads me to the second theory: buddy movies are often about people from opposite sides of the tracks, with different philosophies and views on life, who have to overcome their differences and learn to work together for the betterment of both parties. Each buddy cop movie is a microcosm of those famous words from the right honorable Rodney King: “Can’t we all just get along?” It is in that spirit that a fast-talking cop from the hood can end up being best friends with a Chinese kung fu cop who’s clearly 20 years older than he is, at least.

In the end, buddy cop movies are a little pocket of optimism in this sea of despair in which we live. They show that people can work together despite their differences and get results, and along the way do at least two sick ass car jumps, shoot a dozen people and probably high-five or some shit like that at the end.

So please, take the time this week to get nice and cozy, snuggle up with the one you love, (or at least tolerate) and watch your favorite buddy cop movie. It does a buddy good.

*It wasn’t too good either. Paul Feig sucks at this stuff!

Joshua
Rockville, Maryland, United States
I live to write and write to live. Literally, my keyboard is hooked up to my vitals. If I stop writing for even a minute I'll start flatlin............