Loneliness of the Short Distance Runner 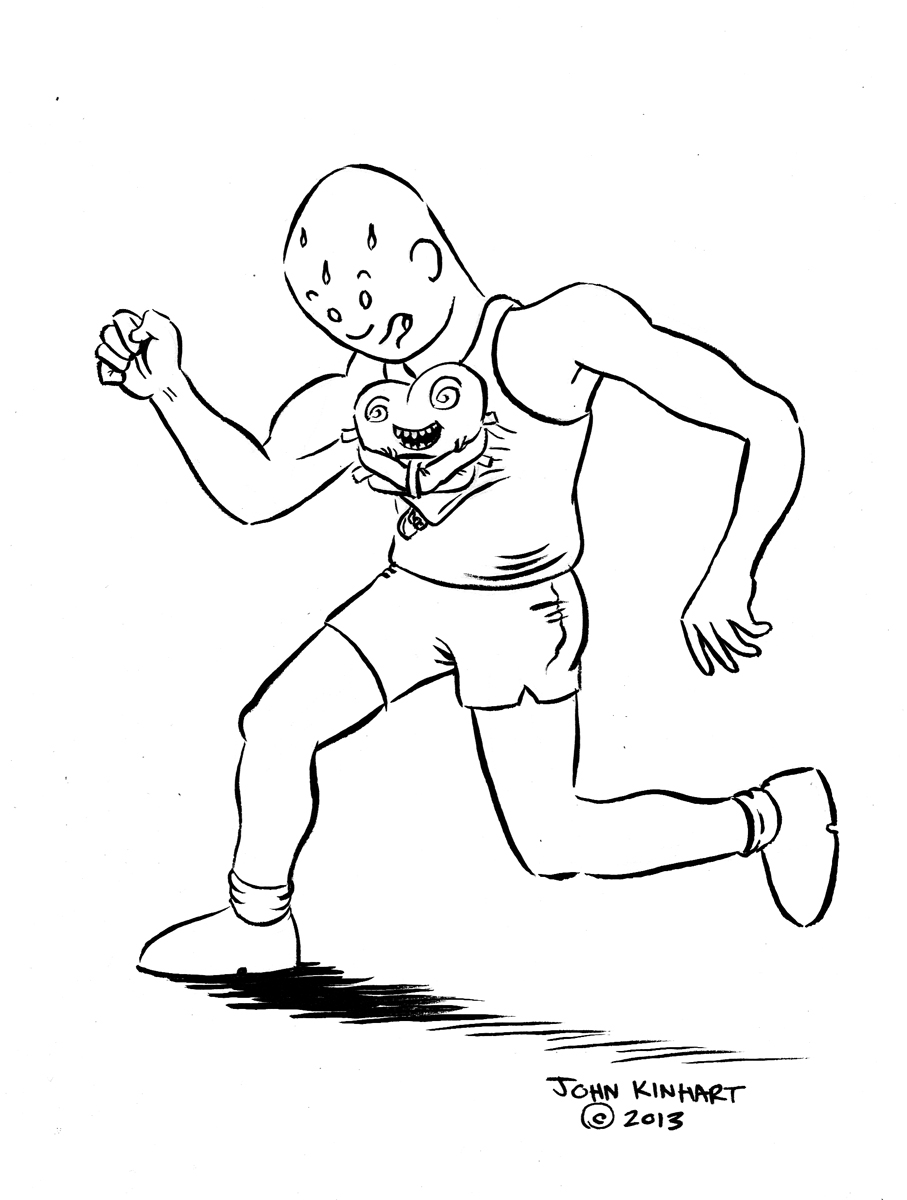 My heart was going like crazy. You know how you always hear those metaphors and similes about people’s hearts beating really fast and really hard? Yeah, they’re all true and the whole area is so saturated with sayings that I’m not going to waste my time adding a new one. Just pick one you like and run with it.

Speaking of running, that was what was currently causing my increased heartbeats. Well, at this point it wasn’t running so much as it was more like a controlled stagger, or perhaps a determined scurry. Between the salty sweat burning my eyes, my heart doing its best to break its way out of my chest and the fact that my feet felt like I had decided to take a stroll through a bed of hot coals, I was not having fun. And I was only 1.5 kilometers in.

What was I doing, you ask? Why was I doing it, you wonder? Easy, I was running a 5k race, for charity. That charity being “Tats for Tots” (because I firmly believe that every infant in America should have a tramp stamp.) Actually, a friend convinced me I should do it. He said it was a good cause and it’s great exercise. After he woke up from my bitch slap at such a ridiculous concept, he offered to pay me money instead. I can’t turn down a good bribe. (Be sure to take note of that. If I’m ever a referee at a game you’re playing in, it may come in handy, hint, hint.)

Sure I used to run all the time in the army. I’d run from chores, responsibility, accountability, etc. But it’s been a few years. I’m not the spring chicken I used to be, (what does that make me, a fall hen? And why a chicken? I’m a dude. But I digress.) I have a spare tire big enough to hide a shipment of cocaine smuggled in from Mexico. Which meant that I had to begin my training.

* Cue training montage. Shots of me doing one-armed push ups, squats while holding a car, pulling a train with my teeth and other such normal things that I do on a regular basis. Have “Superballs” by Insane Clown Posse playing over it. *

After a grueling 23 minutes of training, I knew I was ready. Which was good, because the 5k started in ten minutes. Which about brings us up to speed (get it?) to where we were at the beginning of this non-linear story.

I never realized how much my body is an old collection of broken down junk. Maybe people are on to something with the whole “eating healthy” “diet” and “exercise” thing. Maybe I should have treated my body better so that it would treat me well in return. Maybe I should have bought those steroids from that shady Bulgarian doctor.

I decided to fight on. I wasn’t going to let this measly 5k beat me (how far is that anyway? I’m American, I don’t believe in the metric system). So I focused my mind like a steel trap, honing it on my one goal. I concentrated on my destination. I willed my body to ignore all aches and pains. I pushed myself harder, faster. My eyes never wavering from the finish line. I had become the definition of running. My body and mind were perfectly in synch. I was an arrow, a missile, a rocket. Launched at a target and ready to complete my goal. I could not be stopped. I was the Flash, Sonic the Hedgehog and some third really fast fictional person in popular culture. Everything became as a blur to me. Time slowed, I felt like I was running through thick, viscous air. People looked frozen in place as I sped by them like a bus that couldn’t go under 50 miles an hour or it would explode (?). I ran through that finish line tape with all the joy and pride of somebody who just one the Nobel Prize for curing boob cancer, (you’re welcome ladies.) I had done it! First place! I set out to accomplish something and did it with determination and zeal! I climbed that mountain! And as I stood there, proudly, with my chest out and thunderous applause in my ears…

… I woke up. The EMT guy said that I tripped on my laces and the starting line and knocked myself unconscious.

This is why I don’t get out of my recliner.

Joshua
Rockville, Maryland, United States
I live to write and write to live. Literally, my keyboard is hooked up to my vitals. If I stop writing for even a minute I'll start flatlin............